This year, I attended the Free Open Source Developers European Meeting for the first time. For those who don't know, FOSDEM is a big event (5000 people) held every year in Brussels, organized by the community and free to come to (you don't even need to register!). Mozilla happily sponsored my travel and hotel for the 2014 edition, so I wanted to write a few things about my experience. Unfortunately, that took some time; planning for next year has already started!

The schedule was very diverse, and had lots of stuff I found interesting. On Saturday, I mostly hung around the Mozilla devroom, where I was assigned to help out with speaker assistance. It turned out that the extra effort for that wasn't needed most of the time, although I helped out a few times guarding the doors at the start of particularly popular talks (mostly the JavaScript ones). In between, I got to focus on the talks, some of which I really liked. 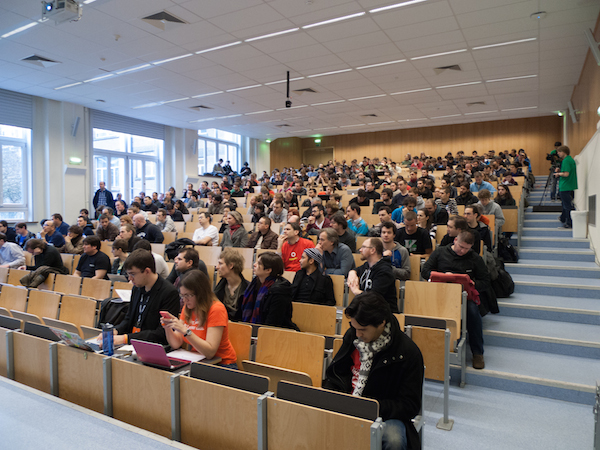 The talk on Firefox for Android provided some nice background about what the Fennec team had been up to, presented in an engaging way. The talk on Persona got quite a bit of interest, though I thought the speaker wasn't great. I helped answering some questions on Persona, and engaged with some of the more interested people after the talk, which was nice. Servo is Mozilla's research browser engine, and it's actually being written in Rust, a very interesting systems language being developed in tandem with Servo. The talk about it was one of the most interesting ones to me, even though I'd heard some of the content before at the Mozilla Summit. The Q&A after the talk was also quite interesting, continuing with a small circle of people outside the room for quite a bit.

At the end of the day, I went to the alpha announcement for Mailpile, which I'd previously seen mentioned on Hacker News. I thought the presentation was great, and the room felt very enthusiastic to me. I even cloned the Mailpile repo during the talk to see if I could get it running; unfortunately there were some issues getting a profile set up. I later tried the second alpha, which exhibited similar failures in the setup processes, so it's been a little disappointing so far. However, I filed an issue and hope things will be better in the beta.

After that, I attended a Gentoo BoF. I've been a Gentoo developer for a few years, but hadn't really met anyone in person before. Since most of my fellow Gentoo devs already know each other or had been hanging around the Distributions devroom all day, it was a bit weird to get in at the end of the day. Fortunately there was a nice round of introductions, so at least I have met some people now. On the other hand, I had to skip the Gentoo dinner for a Mozilla party.

The party was great, of course; it's always nice to get to know Mozillians. Afterwards, four of us went to get a beer on the way back to the hotel, where we had some good discussions about Mozilla's strategy and future. In the end, I always like these conversations in a smaller group the best.

On Sunday, there was no longer any room available to Mozilla and the booth we had was already pretty well-staffed, so I felt free to visit some other talks I wanted to see. I started off early trying to get into the clang talk in the LLVM devroom, but couldn't get in, even at 9 AM! Many of the devroom were full for most of Sunday, which was a pity. On the other hand, being at the door of the Go devroom really early got me a nice seat for the Camlistore talk by Brad Fitzpatrick. Camlistore is an impressive project, and I actually tried to get it running the same day, but the lack of end-user documentation makes it hard to get started (and I'm not a fan of Go) or how to use it fruitfully.

Early in the afternoon we had a small CouchDB community meetup. Benoit Chesneau and I and a few CouchDB fans got together to discuss some things that were going on. I particularly liked talking to our users to hear what problems they were trying to solve with CouchDB. After this I went to the big keysigning session and exchanged verifications with some 80 other hackers, so that my GPG key should be pretty well-connected by now (at least in the FOSS ecosystem).

The final talks I saw were the Python CFFI talk, which was nice but not that interesting since I already had some experience thanks to nnpy (a nanomsg binding), and the satirical NSA keynote from phk, which was fun.

In the end, I had a really good time at FOSDEM. It's a very large event, so I was happy to be able to hang out with the great Mozillians in the devroom and near the booth. Thanks to the Reps program for sponsoring my going there!